Last year was a seriously big year for my family.  We had not one; not two; but three weddings (including my own). The first of these was my little sister’s, last May.  I would not hear of anyone else throwing her bridal shower–I felt very strongly that I needed to throw it myself.  My original plan had been to co-host the shower with our cousin-cum-sister Krissy, and to make it a very festive, shamelessly ladylike tea in the charming garden of my mother’s new house.  But though the weather was perfectly springy and sunny all week on the day of… it was not only freezing but incredibly rainy.  I was distraught!  Even if there was to be a break in the rain (which there wasn’t), the lawn on which the tables and chairs were to go would be too spongy and muddy to risk it.  But that’s event planning for you–you always, always, always have a Plan B.  For me, that meant moving the whole thing indoors and using my mothers’ massive trestle table to seat everyone, rather than having three smaller tables arranged on the lawn. 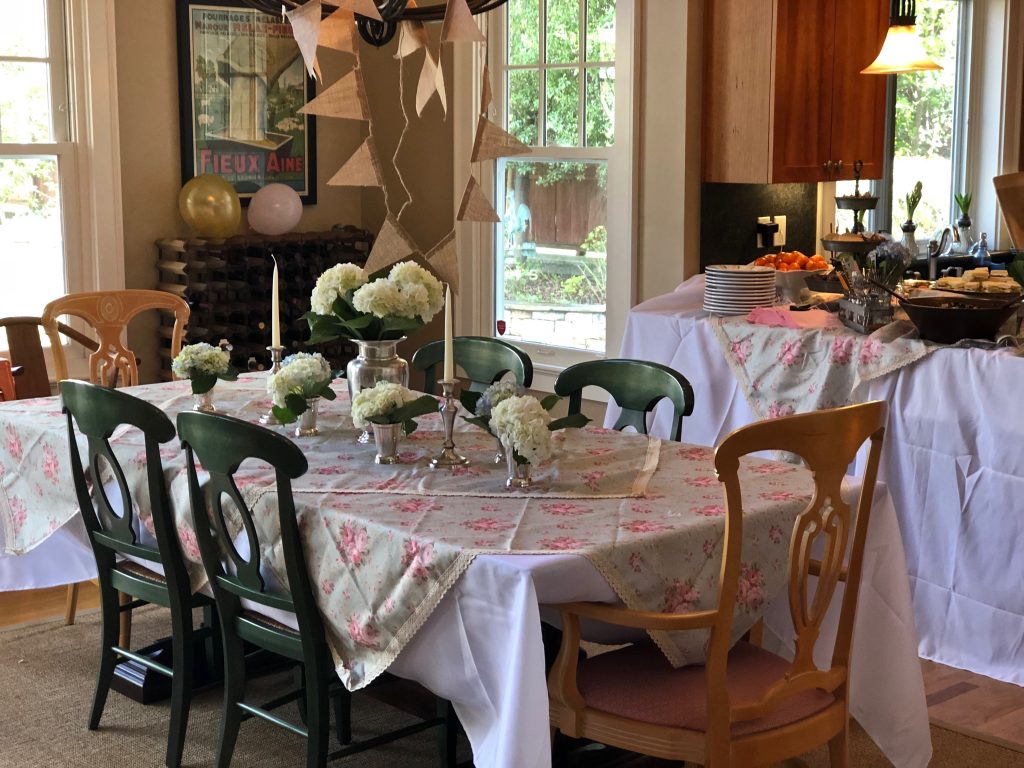 When the setting had to move indoors, I took the tablecloths intended for smaller tables and staggered them to drape the entire–much larger–dining room table.

Instead of setting out all the food on the teak patio table and having a separate adjacent station for drinks, I commandeered the kitchen peninsula and draped it with tablecloths, over some upturned wooden boxes to give the buffet offerings height and interest, and completely cleared off the sideboard to use for the make-your-own mimosa bar. 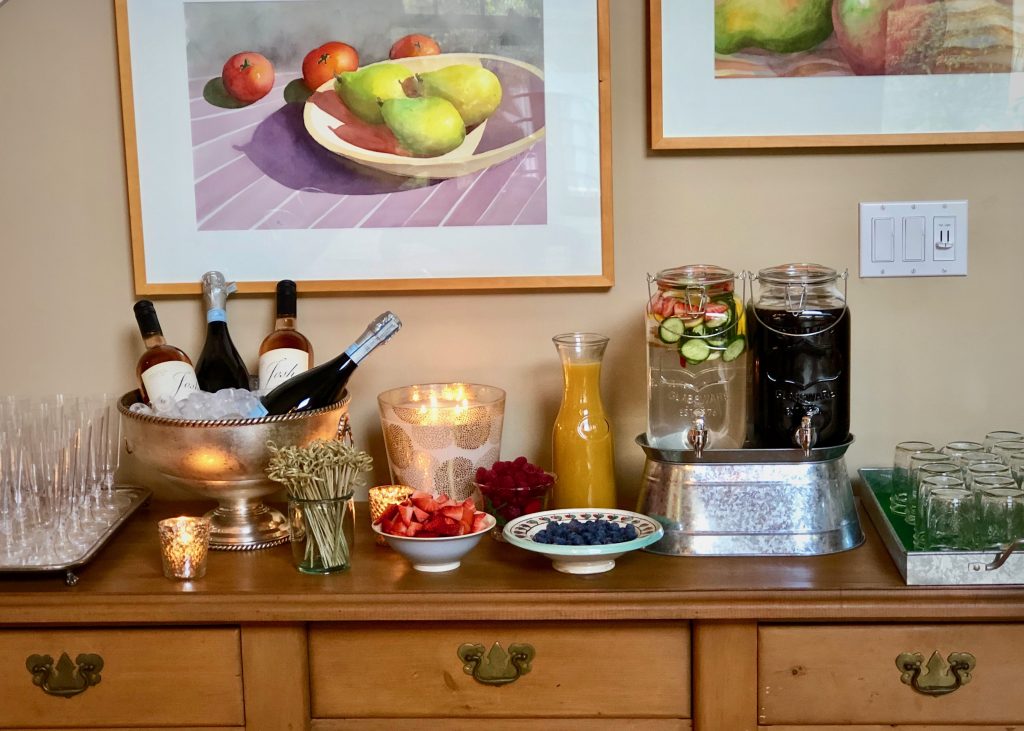 The make-your-own mimosa station with plenty of berries for garnish and juices to choose from. On the side, for the non-drinkers, oversized Mason jar dispensers of spa water and sweet tea, with Mason jars for drinking. My family’s been drinking from mason jars–which we’ve always had around by the jillion from summers spent canning–since way before they were, of all things, trendy!

With a Motown-heavy playlist that I suspected would appeal just as much to the Millennials as the moms, and a little champagne in every glass, the indoor rustic tea party was off to a good start.  I set out silver mint julep cups full of hydrangeas, a silver punch bowl filled with ice to chill down the wine, and lit all the candles.  We strung the stairs and light fixtures with the burlap bunting I’d found on Amazon–an amazing resource for budget-friendly party decor.  The full buffet of food was out from the start, which looked a little something like: 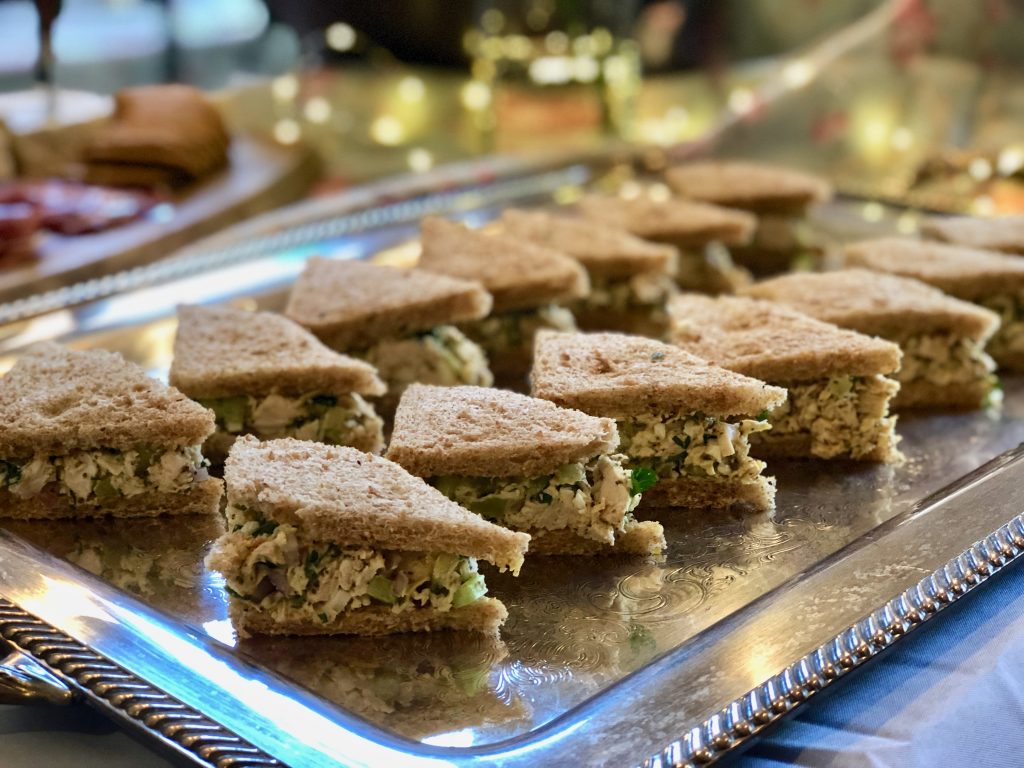 Everyone loves a chicken salad sandwich, and this recipe is simply, hands-down, the best I’ve ever had. There was not a morsel remaining after lunch.

I made a lot of the foods–namely the fillings–ahead, which is one of my strategies when entertaining to divide up the work so that it doesn’t become too too overwhelming on the day.  Easier said than done, of course, but it helps me manage.  For example, I made the shortbread cookies and the lemon curd, as well as the chocolate buttercream frosting for the cupcakes, in my own kitchen in Los Angeles.  I just packed it on dry ice and brought it up with me.  I prepared the quinoa for the salad, the chicken salad, and the cream cheese for the cucumber sandwiches all the day ahead.  The trick–with things like a cream cheese spread or a buttercream frosting–is to take them out of the fridge enough time before you need to assemble the food that they sufficiently warmed up and softened to be spreadable or squeezable. 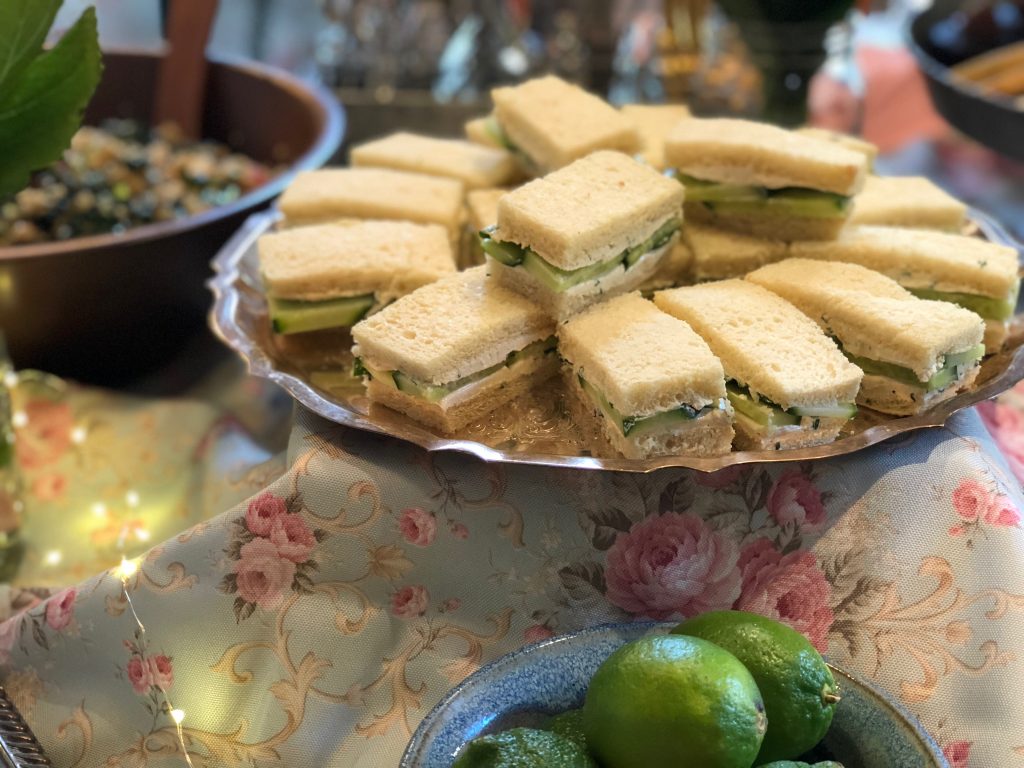 Surprisingly delicious and satisfying Kentucky cucumber sandwiches. Not quite Benedictine sandwiches, and not quite plain tea sandwiches, which use butter instead of the cream cheese spread, these are my own little hybrid of the two styles.

My sister was absolutely glowing, and even though there were moments–as there so often (translation: always) are–in the lead up to an event where I panicked that I had bitten off more than I could chew, or, in this case, more cupcakes than I could frost, seeing her light up when she came back into our mothers’ house and saw the scene inside, I knew I would have done it a million times over.  Even though I was literally scrambling to get into my favorite orange silk Saloni dress and throw some heels on as the first guests were coming through the door.

That’s one of the more miraculous things about weddings and wedding season: they’re a ton of work, and often (cough cough pretty much always) a ton of stress as well, but as soon as you see that amazed smile and know you’ve made such a beautiful memory, all the stress is forgotten.  All you remember is the laughter and the Prosecco.  What I remember, when I think back on that day, is not the moment of absolute panic I had blowing up balloons to toss throughout the house, or slicing what felt like a gazillion little chicken sandwiches into triangles, but the look my sister’s face that told me I had succeeded in making her feel like the special bride I had hoped to.  I remember my aunt and cousin groovin’ away to “goin’ to the chapel and we’re… gonna get maaaaaaaarried…”  And most of all, I remember the moment it hit me, while making a paper plate bouquet with the ribbons from her shower gifts, that she was getting married.  Actually getting married.  And I was snorting with laughter at something someone said and blinking back a few tears at the same time, all while surreptitiously sneaking a sip of my cocktail.

That, friends, is what life is all about.  It’s really that simple.  It doesn’t even take nearly as much as we sometimes make it out to.  It really comes down to making memories like those, with the people you care about most in this short life.  The silly moments, the delicious moments, the moments you have to quickly wipe away a few tears and tie a bow out of ribbon through a paper plate.

So if there’s a bride in your life to be feted this spring, stock up on the champagne, polish up the silver, and don’t sweat the inevitable things that will mean diverting to Plan B.  And feel free to borrow my playlist.  When in doubt, throw some Oldies on and start pouring the wine.

The Supremes and I gotcha covered.

This site uses Akismet to reduce spam. Learn how your comment data is processed.

Welcome to The Tomboy's Guide

Hey stranger! Glad you dropped by my all-purpose guide to living all things tongue-in-chic. I’m Piper: Nashvillian by roots, California girl by birth. As a kid, you could say I was a bit of a tomboy; always running around with my siblings through the orchard we grew up in. I make a point to carry that same joie d’vivre into everything I do now: whether it’s with a tomboyish twist to my outfit du jour; where I go exploring with my husband, Ben; or what I’m fixing in the kitchen; or how we welcome people into our ever-evolving home! So get yourself an iced tea—or a G&T, just because—and make yourself at home.

Tasty Morsels Right To Your Inbox!